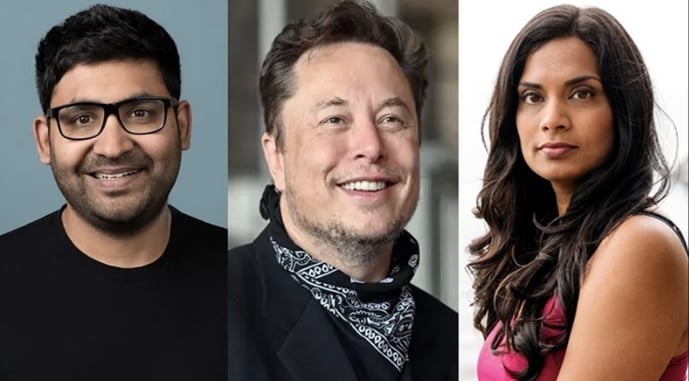 Elon Musk fired top executives at Twitter once he took over.  He fired them “with cause” to prevent them from receiving millions in perks upon leaving the company.  Good for him.

Last week the sale of Twitter was final and Elon Musk took over the defiled company.

This was good news that Musk fired the top brass at Twitter, which many Americans abhor.  These men and women thought that they knew what was best to be said in America and evidence shows that they worked with the corrupt Democrat party to prevent most everything shared by conservatives on the site.

Twitter’s now former corrupt execs censored free speech in America by working with the Democrats to prevent this speech.  They censored tweets and individuals from using their platform, especially after the stolen 2020 Presidential Election.

These people believe like communists do that their opinion of what should be said is the best.  Last week they were fired with cause.  As a result, they will lose millions in perks.

Twitter’s securities filings show that senior executives are entitled to a year’s pay and accelerated vesting of at least a portion of their unvested stock awards if they are fired for any reason – other than cause – within a year of a company changing hands.

Parag Agrawal, the CEO, who repeatedly clashed with Musk over the number of users Twitter has, was reported to be walking away from his job with $42 million, after being a chief executive officer for just under a year.

Twitter’s former top lawyer Vijaya Gadde, who earned $17 million in 2021, was reportedly in tears in April when Musk’s takeover first came to light. She was in line for a $12.5 million payout, Insider said.

Ex-CFO Ned Segal – who was the man behind Donald Trump’s Twitter ban – was expected to receive $25.4 million after being fired by Musk on Thursday evening.

The payout for the general counsel, Sean Edgett, was unknown.

Musk’s reason for firing the four ‘for cause’ was not known, The Information reported.

The post Elon Musk Fired Top Twitter Execs “with Cause” to Prevent Paying Them Millions in Perks appeared first on The Gateway Pundit.

Emergency Broadcast: J-6 Political Prisoner Jake Lang Put in Isolation in Maximum Security Prison for Recording Audio for TGP – HAS NEVER BEEN CONVICTED OF A CRIME, HAS BEEN JAILED SINCE JAN 2021 – AUDIO

Another Competitor in the Woke Olympics: The National...