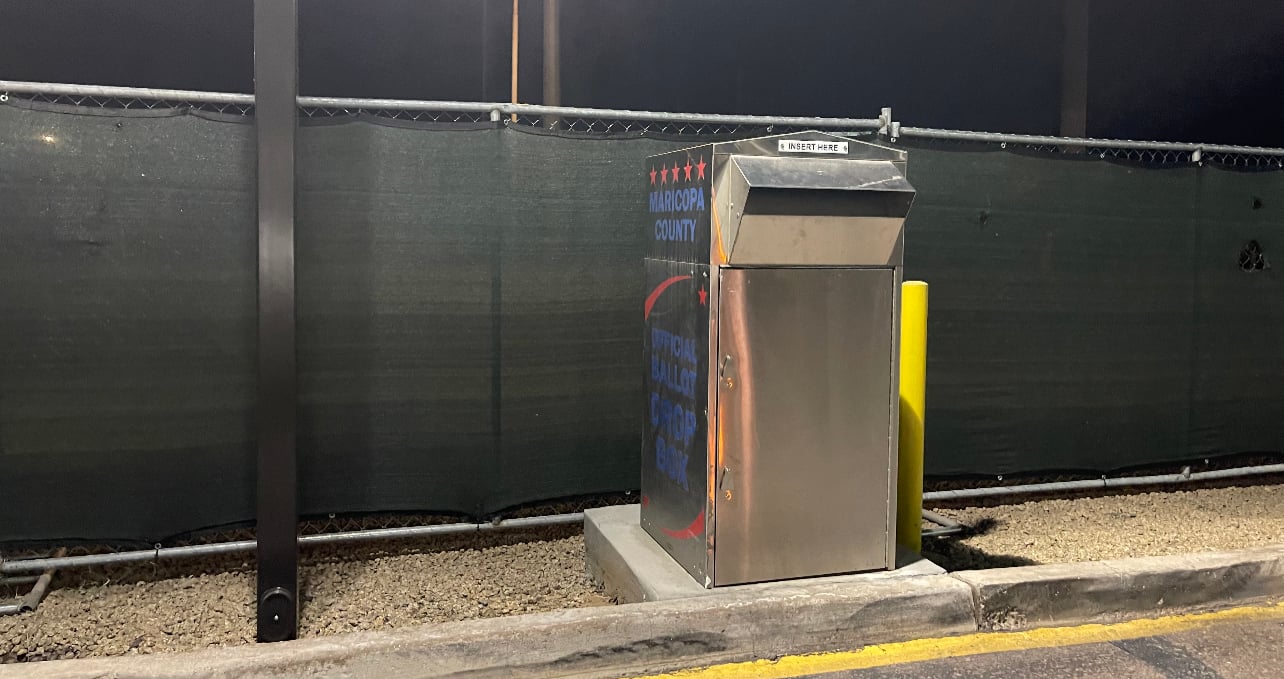 Heavily armed Maricopa County Sheriff’s deputies were recently assigned to watch ballot drop boxes across the County from unmarked vehicles, but not to prevent election fraud or illegal ballot stuffing.

Instead, they are there to intimidate Patriots who feel the need to observe drop boxes and identify ballot traffickers.

This is similar to the tactics used by the Soros-funded Maricopa County Sheriff and the Biden Justice Department during the Arizona 2022 Primary Elections.

The Gateway Pundit previously reported that Patriots independently investigating voter irregularities, ballot trafficking, and outright fraud in the Primary Election would be scrutinized for “interfering with the right to vote peacefully.”

A Biden-appointed Federal prosecutor and plainclothes Sheriff’s deputies were investigating individuals who were protecting the right to vote instead of election fraudsters.

This week, The Gateway Pundit correspondent Jordan Conradson spoke to the armed officers outside their car that was parked across the street from MCTEC. More rifles can be seen in the back seat. The officers turned off all lights when Conradson began photographing the vehicle. “We’re not here for shoving ballots in boxes. We’re here to keep the peace,” one deputy outside the Maricopa County Tabulation and Election Center (MTEC) told The Gateway Pundit. “We have a guy over in Mesa,” he added.

It is unknown who these individuals are, and they were covering their faces to conceal their identities. Are they bad actors? Who knows?

A spokesperson for MCSO told Insider that deputies were dispatched to the voter ballot box at the Maricopa County Juvenile Court at about 7:45 pm on Friday night.

“Deputies responded and were able to determine that the individuals were not breaking any laws and were more than 75 feet away from the ballot box as required by law. MCSO will continue to work with our local, state and federal partners to ensure a safe and just election process for everyone,” Sgt. Calbert Gillett said in an email to Insider.

A tarp placed on the fencing surrounding the Election Center also conceals the ballot drop box at MCTEC. A deputy told The Gateway Pundit that one corner was left open “for the news media so they can sit there and they can film.” When asked if only news media can film, he told us, “no, it’s a public street. So, anybody can be out here… but when it’s people that are not [media], and they’re taking license plates down, it makes people uneasy.”

It is perfectly legal for others to watch the drop boxes and to even film cars at drop boxes. There is no need for Sheriff’s deputies to watch drop boxes unless they are there to prevent fraud.

Since the 2020 election, hundreds of grassroots activists concerned about Democrats stealing elections have formed citizen groups to stake out and observe ballot drop boxes.

These are patriotic Americans who, unlike Democrats and delusional Republicans, prefer to hold elections that are free from fraud.

Of course, secure elections infuriates the left and their posse in the fake news.

Fake News activists like Nicole Grigg are heavily reporting on ‘voter intimidation complaints’ in an attempt to smear patriotic Arizonans trying to prevent voter fraud in the midterm election.

The specific complaint referenced below shows that a voter approached citizen drop box watchers first, yet still accused the watchers of harassment.

DEVELOPING: The AZ SOS office has received three more voter intimidation complaints outside an AZ drop box, all being sent to the DOJ for investigation.

One of the reports details the same group I saw Wed. night, they claimed they were with Clean Elections USA. @Garrett_Archer https://t.co/ZYbxMFvTKK pic.twitter.com/yCvh8qkND4

However, as stated by deputies, it is perfectly legal to stand on a public street and take photographs or videos from more than 75 feet away. The Fake News does it too.

This is outrageous and unacceptable. We will take whatever legal steps are necessary to prevent this type of illegal voter intimidation and harassment. https://t.co/XjzIJ5bxVn

Earlier this week, it was reported that lawyers with Marc Elias were in federal court to stop the drop box watchers in Arizona.

NEW: a hearing is about to begin in federal court to try and stop ‘self-appointed’ ballot box watchers in Arizona.

These are some of the lawyers with @marceelias

They represent the plaintiffs who are asking for a stop bc of voter intimidation concerns @abc15 https://t.co/1HCLqL25Y0 pic.twitter.com/lvyVb6C9J2

The exclusive drop-box footage from the 2020 presidential election was obtained by The Gateway Pundit and Attorney John Burns.

The Gateway Pundit was THE ONLY MEDIA OUTLET in the country to obtain this footage following the suspect 2020 election.

The MC4EI team in Michigan spent hours scouring through the thousands of hours of security camera footage to put together this explosive 13-minute video.

Special thanks to Patty McMurray and 100 Percent Fed Up for her help in coordinating this effort.

The MC4EI team captured dozens of instances of ballot trafficking in the 2020 Detroit Election.

The fraud was captured on camera and in broad daylight.

This is why the left does not want Patriots watching unsecured drop boxes.

In Blow to Democrat Ballot Traffickers: Federal Judge Rules That Watching Drop Boxes For Voter Fraud Is Protected Under The First Amendment In Arizona After Marc Elias And Attorneys File Lawsuit

THE FIX IS IN: Joe Bidens Warns Americans...