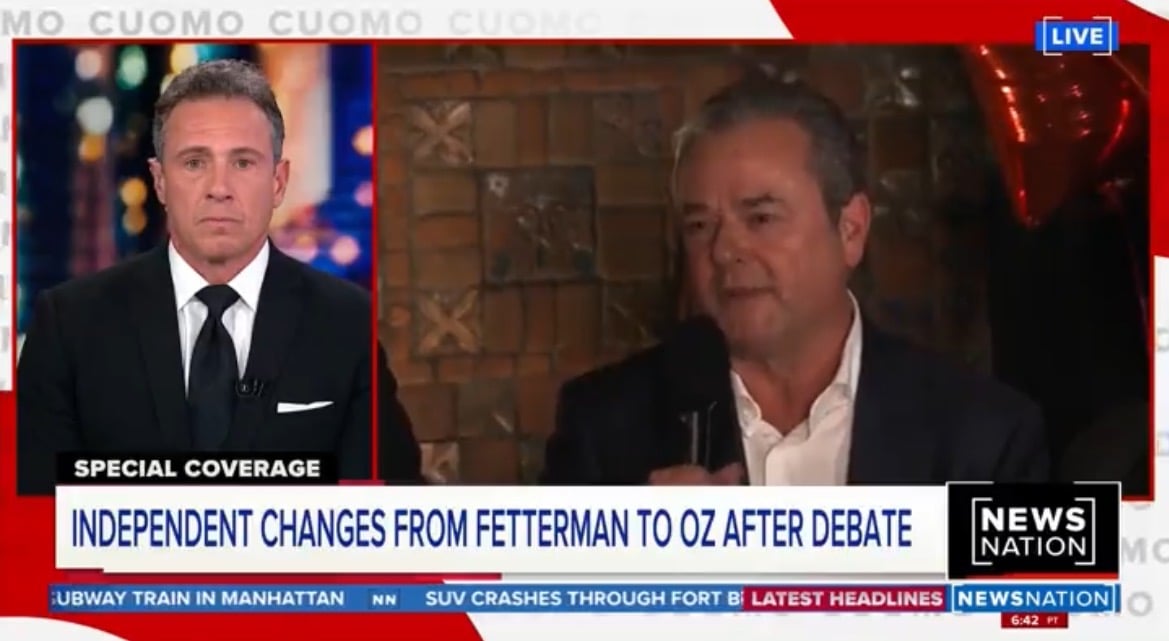 Fetterman waited until the last minute to debate Oz because he can barely speak after his massive stroke in May.

John Fetterman used a monitor to help him through Tuesday night’s debate and he still fell apart.

Fetterman did so bad that even liberal reporters criticized his performance.

Fetterman’s Comms Director, Joe Calvello jumped on stage for some post-debate remarks to the media and melted down in a profanity-laced tirade.

Independent voters interviewed after the debate said they changed their mind and will vote for Oz after realizing Fetterman is unable to speak coherent sentences.

The media covered for Fetterman all year so for some voters, this is the first time they have seen Fetterman speak after his massive stroke.

“I’m an independent, I was leaning towards Fetterman, but I have totally changed to the Oz side,” an Independent voter told Chris Cuomo.

A Democrat told Cuomo she is now unsure if she will vote for Fetterman after watching the debate.

“I am a registered Democrat. I’m not 100% sure where I’m going on Election Day,” the voter said.

“I’m an independent, I was leaning towards Fetterman, but I have totally changed to the Oz side.”

“I am a registered Democrat. I’m not 100% sure where I’m going on Election Day.” pic.twitter.com/V45VRbRAmS

One Independent voter told Fox News that he will be voting for Oz after watching Tuesday night’s debate.

“It was very, very difficult to watch. Fetterman is not physically capable of serving in the US Senate,” voter Marc Goldberg said.

“I’m a registered Independent… I don’t know how anybody in their right mind, who are in the middle like me, could possibly vote for John Fetterman,” he said.

Has Ukraine’s Army Been Reduced by Almost 50%?