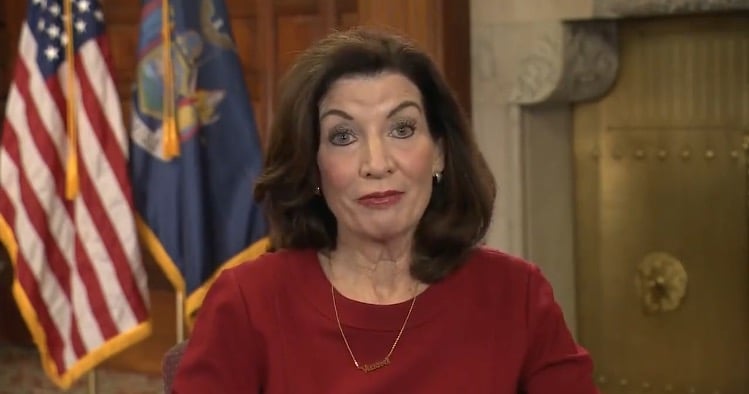 On Monday, failed NY Governor Kathy Hochul dismissed the crime fears of New Yorkers saying that a few high-profile crimes have “created a sense of fear in people’s minds.”

Things “in the minds” of New Yorkers?

A woman was bashed in the head in an unprovoked attack on a New York City subway platform in Harlem.

A 14-year-old boy was fatally stabbed on a New York City subway platform over the summer.

The father of a Marist College student, located in Poughkeepsie, was shot dead  while in town for family weekend.

A 43-year-old man was fatally stabbed on the L train after a dispute.

FDNY EMS Lt. Alison Russo, a September 11, 2001 first responder who devoted her life to serving the people of New York,  was killed after a random stabbing in Queens in broad daylight.

A 13-year-old girl was charged for her involvement in fatally beating a New York City cab driver to death in August.

In July, a bodega worker had to defend himself against a knife-wielding attacker.

At a campaign rally, a man armed with a knife jumped on stage and attacked New York Republican nominee for governor Rep. Lee Zeldin.

Author Salman Rushdie was stabbed in the neck at an appearance in the state, likely leaving him blind in one eye.

In June, a young mother pushing her infant in a stroller in the Upper East Side was executed by a gunman wearing a black hoodie who fired one shot point blank to the back of her head.

A woman begged for help on the subway as a man violently grabbed her hair and held her captive for a brief period.  No one helped.

No worries New Yorkers,  it’s all in your head.

And her dismissive comments came just days after Mayor Eric Adams characterized the crime concerns as a “perception” problem.

“And what I can do is my New York Transit, MTA transit police — I can bring them in and have them be fortifying our main transit hubs,” Hochul said in response to a reporter who asked about the “Cops, Cameras, Care” subway-safety program she announced Saturday with Adams.

“All it is is a cooperative effort to respond to, you know, the high-profile instances which have created a sense of fear in people’s minds,” she said. “I think that’s going to make people feel a lot better when they see that.”

The comments echoed last week’s controversial assertion by Adams that media coverage of recent subway attacks was causing riders to experience the “perception of fear” underground.

Snuggly Pet Deals: MyPillow Dog Beds And Dog Blankets On Sale (Up To 50% Off!)

Tyrant Zelensky to Ban Ukrainian Church After He...