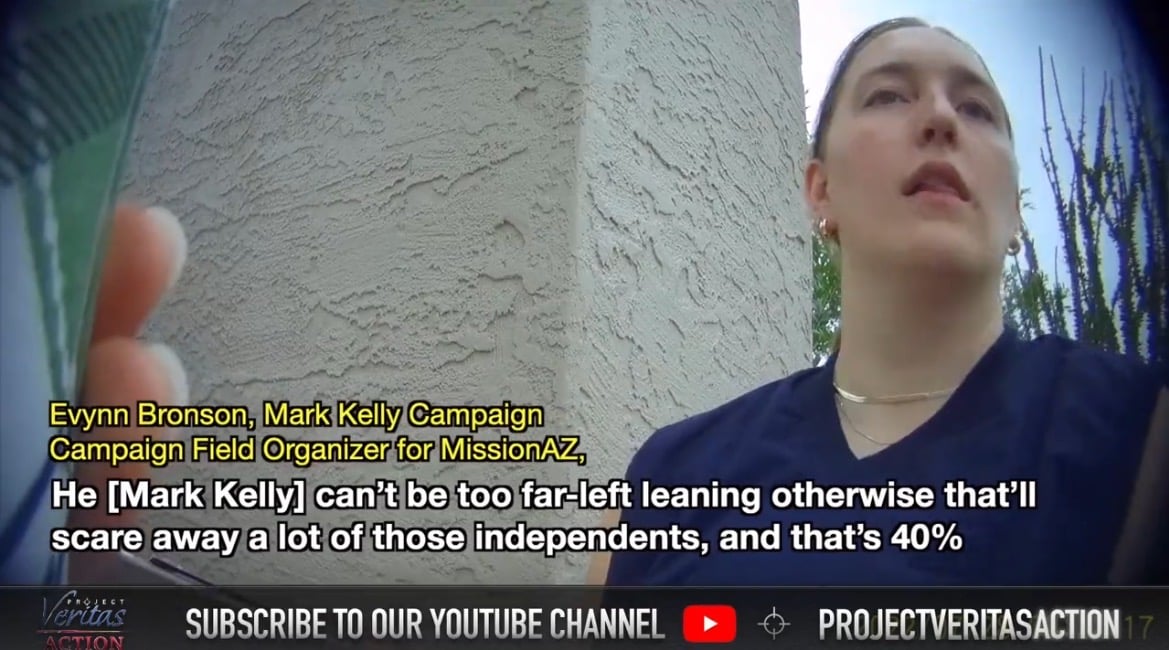 When asked to lie about Mark Kelly’s stance on abortion, the journalist asked if Mark Kelly is pro-life, and his staffer responded, “absolutely, he’s not pro-life.”

The staffer advised the journalist to say, “Mark Kelly is pro-life but also pro-keeping the government out of our healthcare. I don’t know, something stupid like that” because ” he can’t win with just Democrat votes.”

They even laughed as they told the journalist to invoke Mark Kelly’s wife, Gabby Gifford,  a mass shooting victim in 2011, and say that Mark Kelly values life because of this tragic incident.

These people are disgusting, and they only value life when they’re pushing their pro-death agenda.

Ironically, the Satanic Temple’s website actually refers to abortion as a “religious ritual.” It is literally a religious sacrifice for these people.

This is the latest in a series of undercover operations in Arizona’s 2022 Midterm Election. Yesterday, we reported that Democrat gubernatorial nominee Katie Hobbs’ twin sister, an employee of a Democrat PAC called Mission for Arizona, admitted that Democrats donated to Trump-Endorsed Primary candidates and that she registered as a Republican to influence the Primary Election in Arizona.

Hobbs likely ran away from Maxwell because he is a black man. She was unanimously twice-convicted by two separate juries for racial discrimination in the workplace, and she embraced slavery in high school.

This is a must-see video.

O’Keefe released a teaser video over the weekend indicating that Mark Kelly would be exposed, and here it is:

PV Journalist: You weren’t a volunteer. You were a paid staffer for Mark Kelly?

James O’Keefe: They both canvassed neighborhoods together. The staffer says that Senator Kelly is “playing both sides” and advises the campaign lie.

Kelly Staffer: He definitely tries to do a lot to work bipartisan, both Republicans and Democrats. So he’s not gonna outright say, like, all of the very liberal…

PV Journalist: Even though you think he’s going to do them anyways?

Kelly Staffer: Yeah, for sure.

PV Journalist: Why do you think he doesn’t just say that?

Kelly Staffer: He has to play both sides. 40% of the people voting are undecided whether or not they’re gonna vote Republican or Democrat,

PV Journalist: So you think he just like needs to say that to get votes?

Kelly Staffer: Well, he’s not going to say anything outright about what he’s going to do unless it will garner support from independents and some of the moderate Republicans.

PV Journalist: Because he needs them?

Kelly Staffer: Yeah, he needs them. Otherwise, he won’t win.

PV Journalist: Oh, so if he’s outright said it, then he wouldn’t win.

Kelly Staffer: It would scare people away. Yeah.

PV Journalist: What if I came across a Republican who, let’s say they’re like pro-life, and they ask me if Mark Kelly is pro-life?

Kelly Staffer: I would say Mark Kelly is pro-life but also pro-keeping the government out of our healthcare. I don’t know, something stupid like that.

PV Journalist: Even though he’s not pro-life

Kelly Staffer: Oh, absolutely, he’s not pro-life. And then I’d go to something like, you know, “after his wife was in a shooting, he values life so much. It’s just a shame.”

PV Journalist: What would you stay away from saying, you know, to get them to vote for Mark Kelly?

Kelly Staffer: Like as a Republican? I wouldn’t say pro-choice.

PV Journalist: Even though he is, right?

Kelly Staffer: Even though he is. I wouldn’t say gun control because they’re like the government’s gonna take my guns away. But that’s not all that gun control is. Gun control is not allowing anybody to just walk up and like buy an AK47 to like shoot up. Some of the other issues on here border stuff. That one is a hard conversation because it’s just like, Republicans are like no to immigrants, and also we’re like, we’re in a job shortage. And I’m like, well, if we let the immigrants in, we’d have more people to work our jobs. Even if you don’t know a lot about Mark Kelly and what he’s going to support, you can say the odds of Mark Kelly supporting this are 100 times higher than the Republican voting for this, and there’s no other Democrats running. So it’s like, Do you want a, which the Republican that’s running against him believes that the election was a fraud. Like crazy, crazy, crazy. Conspiracy as you can get. Yeah. And so it’s just like, look at the alternatives. And they’re not super beautiful.

James O’Keefe: voters here in Arizona, are divided and split on many issues, but if there’s one issue voters can all agree upon. They don’t like being lied to. Project Veritas Action journalists will be in the campaigns to decipher what these candidates actually believe and what their staffers are saying, that they won’t say publicly. Reporting from Phoenix, Arizona again, this is James O’Keefe with Project Veritas action, please send us your tips to Veritastips@protonmail.com

Dishonest Mark Kelly claims to be a moderate, but he’s as radical as they come.

Biden One Month After Declaring the Covid Pandemic is Over: Covid is Still a “Global Health Emergency” (VIDEO)

Maricopa County Now Admits That Over 30% Of...