EXCLUSIVE: Katie Hobbs Threatens To SUE Cochise County If Supervisors Vote to Hand Count Midterm Election Ballots – County Supervisor Says “We Will Have George Soros For Governor If We Elect Her” 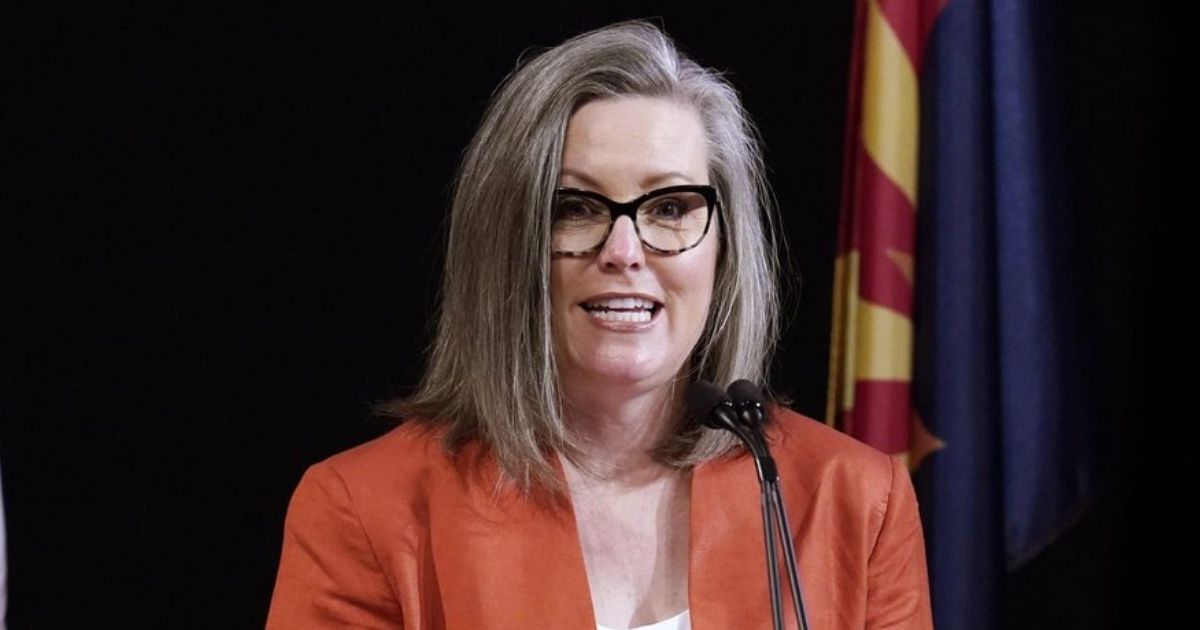 This new decision by Cochise County comes after Arizona Corporation Commissioner Jim O’Connor sent a letter to all Arizona Counties demanding they immediately cease the use of voting machines in the upcoming 2022 General Election and gave testimony at the Rise of Truth Summit.

The Cochise County Board of Supervisors will meet on Monday, October 24 to “order a hand count of all ballots cast in the General Election to be held on November 8, 2022, to be completed prior to Canvass of Election Results.”

The Board of Supervisors provided the following background on their decision:

Over 100 volunteers have mobilized and seek to be vetted, trained and participate in a hand count of all ballots in our County for the upcoming General Election. They are wishing to take part in this way to help people (including a few of the participants) who have lost trust in elections to see that elections are reliable and secure in our county. Two other results of this hand count will be simply a 100% audit of machine accuracy and a test of our back-up plan in case some or all of our machines become compromised or fail at last minute. This count will not affect the outcome of this election County Recorder David Stevens, our State Senator and Representatives are in support of this and will be able to follow through with proper action in the Legislature, if that is needed. None of the voting process will be altered.  Must be completed prior to Certification of Election. Machine count will determine election outcome.

Election Dept Staff or BOS Designee to Call for applicants to execute the hand count.  The same to select, vet, and train applicants.  Using methods prescribed by statute for hand counts and suggestions from Recorder Stevens, selected staff members will design a secure and executable plan.  Provide for supplies and secure areas to hold the hand counts. Report results of the hand count to Board of Supervisors not less than 5 days prior to the Certification of Election.

After Katie Hobbs’ office sent a letter to Cochise County, stating that Hobbs will take “legal action” to prevent a hand count, Supervisor Peggy Judd — who worked with Hobbs in the State Legislature — told The Gateway Pundit that Katie Hobbs is “very naive” and “we will have George Soros for Governor if we elect her. It will be them who are actually running our state.” She continued, “It is legal.”

The County will still count ballots using machines, but they will conduct a hand count audit of 100% of the ballots.

It’s responsibility of County BOS to ensure they can confidently certify the electionhttps://t.co/gXXtUAVyG6

C. If for any reason it becomes impracticable to count all or a part of the ballots with tabulating equipment, the officer in charge of elections may direct that they be counted manually, following as far as practicable the provisions governing the counting of paper ballots.

The letter from Hobbs’ office claims that a hand count of ballots will risk the “accuracy and integrity of our elections.”

However, The Gateway Pundit reported on a Cybersecurity and Infrastructure Security Agency report that revealed massive security vulnerabilities and the potential to install malicious code in Dominion voting machines that were used in Arizona and Georgia.

“Your job is to make sure the machines are certified. You don’t need to worry about what I’m doing,” said Supervisor Judd in response to Katie Hobbs.

Trump-Endorsed Nominee for Arizona Secretary of State Mark Finchem told Katie Hobbs to knock it off and “let the County do what is lawful.”

Let the county do what is lawful and stop putting your thumb on the scale of election justice. Elections are supposed to be run by the people, not the government. #JustFollowTheLaw https://t.co/wZb8U37xNP

The Gateway Pundit reported yesterday that Katie Hobbs has spent almost no time in her office while campaigning for Governor.

She is likely planning to steal another election from her opponent Trump-Endorsed Kari Lake and other Trump-Endorsed candidates for statewide office.

“Where has she been? In her basement,” Judd said.

Now, one of her staff has sent the following email to prevent election integrity in the 2022 General Election.

As you know, Arizona has rigorous standards in place to ensure that electronic voting systems used in our elections are secure and accurate, including federal and state certification requirements, pre- and post-election logic and accuracy testing, and post-election limited hand count audits. See EPM, Ch. 4, A.R.S. S$ 16-442, -449, -602. The use of electronic tabulation combined with these and other security measures allows counties to fulfill their statutory duties in a timely manner while ensuring the accuracy and integrity of our elections. Indeed, as recently explained by the General Counsel of the Arizona Legislative Council, Arizona law only contemplates manual counting of ballots where “it becomes impracticable to count ballots with tabulating equipment.” See A.R.S. $ 16. 621(C).

And this is for good reason: a full hand count raises numerous concerns. Notably, hand counting is necessarily time intensive and prone to human error. Any election director in Arizona–the official responsible for overseeing tabulation of ballots-can attest that it’s impossible to complete an accurate hand count of an election with dozens of races on the ballot in time to comply with applicable statutory deadlines, including the county canvass deadline. A.R.S. 8 16-642(A) (requiring counties to canvass between six and twenty days after an election). Additionally, transitioning to a full hand count this close to the election raises operational and security concerns. Election procedures are generally developed through careful consideration and with sufficient time to prepare for an upcoming election. In fact, Cochise County has already filed its election program and emergency contingency plan for the General Election with the Secretary of State, confirming its usage of electronic equipment for this election. See A.R.S. $ 16-445(A). Early voting for the 2022 General Election began over a week ago, and counties are already permitted by law to begin processing and tabulating ballots. Drastically changing procedures now–mere weeks before Election Day-creates significant risk of administrative error and has the potential to cause voter confusion and mistrust in our elections.

Even if, as indicated at the Board’s October 11, 2022 work session, the Board intends to tabulate votes electronically and conduct a full hand count only to audit those machine-tabulated results, the Board has no authority to do so. County boards of supervisors have only those powers “expressly conferred by statute,” and the Board “may exercise no powers except those specifically granted by statute and in the manner fixed by statute.” Hancock v. McCarroll, 188 Ariz. 492, 498 (App. 1996) (quotations omitted). A.R.S. $ 11-251(3) gives the Board the power to canvass election returns. It does not grant the power to unilaterally perform a full hand count audit of all votes. While A.R.S. $ 16-602 and the Elections Procedures Manual lay out procedures for a limited post-election hand count audit, nothing in Arizona law authorizes the Board to conduct a full hand count outside of those procedures. Similarly, Arizona law authorizes recounts only when the canvassed results fall within the statutorily designated margin. A.R.S. $ 16-661. And when an automatic recount is triggered, it must be done by electronic tabulation. A.R.S. $ 16-664. The Board would therefore be exceeding its authority under Arizona law if it conducts a full hand count under the guise of either a hand count audit or a recount. The Board cannot simply make up its own extra-statutory process.

If the Board votes to proceed with a full hand count–putting at risk the accuracy and integrity of our elections–the Secretary will take all available legal action to ensure that Cochise County conducts the 2022 General Election in compliance with Arizona law. If that occurs, we note that Arizona law provides for mandatory fee shifting under these circumstances. A.R.S. § 12-348.01. We are all stewards of taxpayer dollars, and taxpayers should not bear the burden of the Board’s contemplated unlawful action. We sincerely hope such action is unnecessary and that the Board will follow the advice of its own attorney, protect the integrity of our elections, and ensure continued compliance with Arizona law.

Please let me know if you need additional information.

Why is Katie Hobbs so afraid of a bi-partisan hand count of the ballots?

We recently reported on an election “error” that sent an incorrect ballot to as many as 6,000 voters after incorrectly flagging them as not having proof of citizenship on file.

If a voter uses this incorrect ballot, it will reportedly be “sequestered,” and they will vote a second time on a full ballot.

Who knows what this could mean for the integrity of the election?

Unlike the Maricopa County Supervisors, who have established their own Ministry of Truth, the transparent Cochise County will allow all press to attend this meeting.

The Gateway Pundit recently reported that Maricopa County prevented a TGP reporter from accessing their public meeting “to discuss the start of early voting, how to track your ballot, and misconceptions about voter registration and the voting rolls.”

Maricopa County is terrified because The Gateway Pundit has a larger audience than any media outlet in Arizona, and we report the truth about elections.

The meeting in Cochise County will be held on Monday at 2 pm, and The Gateway Pundit correspondent Jordan Conradson will be there to provide updates.

The post EXCLUSIVE: Katie Hobbs Threatens To SUE Cochise County If Supervisors Vote to Hand Count Midterm Election Ballots – County Supervisor Says “We Will Have George Soros For Governor If We Elect Her” appeared first on The Gateway Pundit.

Trump Responds To Rumors Of Former Cabinet Officials Running In 2024