FACEBOOK IS SPYING ON YOU: Facebook Suspends Wife of FBI Whistleblower Steve Friend After She Responds in Private Message to Post Asking if Family Needs Help 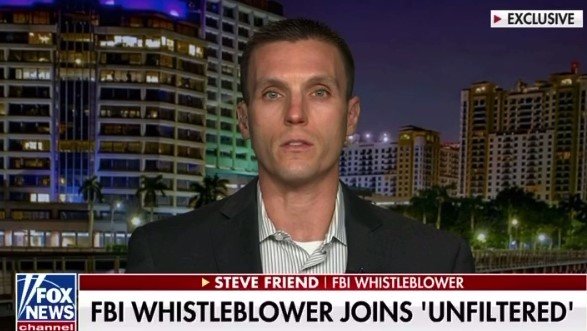 According to the FBI agents the Bureau is weaving a narrative that helps the Biden Regime while painting Trump supporters as terrorists.  This really comes as no surprise since we are living this in real time.

According to the latest whistleblower, the FBI is moving agents off of child sexual abuse investigations to instead pursue political investigations.

The whistleblower says the FBI is creating a false narrative by reclassifying Jan. 6 cases as separate instances of “domestic terrorism.”

Via the House Judiciary GOP:

The FBI whistleblower described how a “manipulative” practice by the FBI overstates the “domestic violent extremism” (DVE) threat nationwide by categorizing Jan 6-related cases as originating in field offices around the country rather than “stemming from a single, black swan incident” in Washington, D.C.

#BREAKING: New whistleblower information reveals that the FBI is moving agents off of child sexual abuse investigations to instead pursue political investigations.

The whistleblower recounted being told that “child sexual abuse investigations were no longer an FBI priority.” pic.twitter.com/EBXrnVWhO6

Steve Friend is a SWAT Team member who has been with the FBI for 12 years. He is married and has two small children. According to Miranda Devine,

“He just could not live with his conscience after he was dragged off these very important child porn, child exploitation, and human trafficking investigations he was working on, and put on the very bogus January 6 cases he has been working on… He could see from the ground how the FBI Washington DC Field Office was manipulating these cases to try and expand and pretend the problem was bigger than it was. And he also didn’t want to participate in SWAT raids on people who were being accused of misdemeanors at worst… Steve Friend stood up and said, ‘I will not do this.’”

Steve Friend told Dan Bongino that his was was permanently suspended from Facebook after responding by direct message to a parent’s post asking if her family needs help.

Facebook banned her. Her family is not allowed to get help according to Facebook. They stood up against the FBI so now Facebook is going to punish the entire family.

Facebook may be actively snooping on private messages of select individuals, the New York Post alleges. The platform suspended the account of FBI whistleblower Steve Friend’s wife after she sent a message in response to a parent’s post asking if her husband needed support.

Friend made a whistleblower complaint with the Department of Justice inspector general, alleging that the FBI had been manipulating case-file management to inflate the threat of domestic terrorism and using excessive and illegal force against the Biden administration’s political opponents.

Agent Dan Friend: My wife, an immigrant from Ukraine, her Facebook account is private. It actually does not have her name displayed on there. It’s not in English. She only uses her account to send indirect messages and to look at family pictures. My wife sent her a direct message, identifying herself as Steve Friend’s wife. And within 20 minutes of sending that direct private message her Facebook account was suspended for violating its terms of use.

Here is the video of whistleblower Steve Friend with Dan Bongino.

The post FACEBOOK IS SPYING ON YOU: Facebook Suspends Wife of FBI Whistleblower Steve Friend After She Responds in Private Message to Post Asking if Family Needs Help appeared first on The Gateway Pundit.

BLOOD ON THEIR HANDS: Number of Police Killed in Targeted Attacks Has Doubled Since Democrat-Sanctioned Anti-Police Protests in 2020

“You Tried to Destroy my Life After all...