Gas prices have soared under Joe Bide to all-time record highs. The price of a gallon of gasoline cost more than $5 earlier this year – nearly a full dollar more than at any other time in US history.

And gas prices today are going back up today. 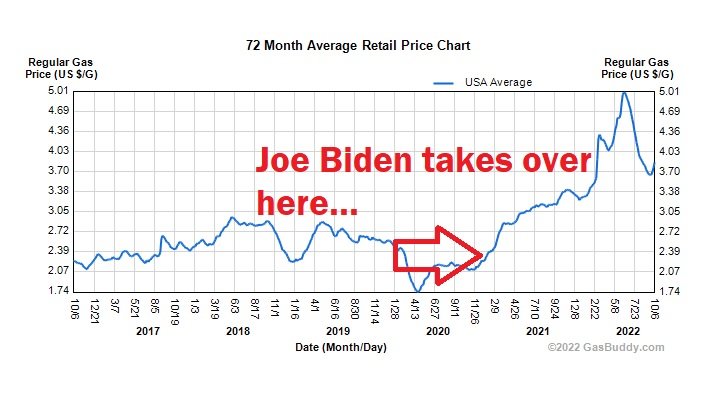 Canceling the Keystone Pipeline costs over 11,000 construction jobs and 42,100 jobs throughout the US during the construction process according to the US State Department.

Despite the record pain at the pump, Joe Biden blocked oil drilling on millions of acres of US land in April.

Instead of drilling for oil here at home Joe Biden begged the Saudis and OPEC to keep pumping gas. Joe and Democrats were too busy destroying American energy sector and then cheered the policy failure.

On Monday Joe Biden tweeted out a picture of himself with a 69 Corvette. The caption read, “Get in, folks. We’re building a better America: http://JoeBiden.com”

Biden openly mocked American families by posting the photo of the gas-powered Corvette after decimating the American energy sector.

Get in, folks. We’re building a better America: https://t.co/V9Mzpw8kB0 pic.twitter.com/cMKiF0Lqwz

The Democrats mock Americans as they lead us to our ruin.

The US Oil and Gas Association eviscerated Joe Biden in their response.

If I am not mistaken, the 67 Chevy Corvette has a 327 cubic inch, L79 V8 engine rated at 350 horsepower with a 4-speed manual transmission.

It runs on gasoline.

To build a better America – we will still need it…. https://t.co/TzKpWVjGf5

This was also a perfect response…

Doomsday Clock: Biden Regime is Stockpiling $290 Million Worth of Drugs for Radiation Sickness in Case of Nuclear Emergency